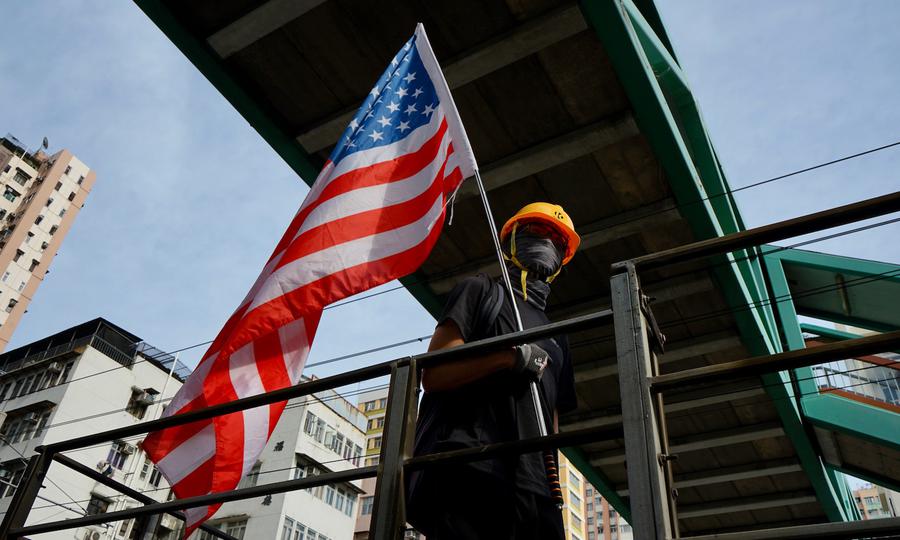 When black-clad protesters gathered at Hong Kong’s central Chater Garden for a mass rally on July 28, an unlikely tune rang through the air: a rendition of the United States’ national anthem performed by a megaphone-carrying activist in black sunglasses and a face mask.

As activists waved American flags and appropriated “The Star-Spangled Banner” as a protest song, a China Daily editorial published that day reiterated Beijing’s verdict on a protest movement that has brought parts of the semi-autonomous city to a standstill since demonstrations began in June.

“Judging from the preparation, targeting strategies, riot tactics and abundance of supplies, it takes naivety akin to simplemindedness to truly believe these activities are not being carefully orchestrated,” the state-run newspaper’s editorial said.

The editorial said the demonstrations are a “color revolution” orchestrated by local opposition politicians in collusion with foreigners, namely the US.

The term is a reference to various pro-democracy movements, some of which adopted a specific color or flower as their symbol, that erupted in several countries of the ex-Soviet Union in the early 2000s that toppled unpopular regimes with the backing of student activists and Western-financed civil society groups.

The primary objective of such campaigns, the editorial claimed, is to “topple governments utilizing modern communication technology to spread rumors, distrust and fear,” a stance that reflects the Chinese government’s longstanding security concern that Hong Kong could become a base for foreign-influenced political destabilization.

On July 27, Asia Times interviewed a 24-year-old American flag-carrying activist who identified himself only as David. “I would like to urge the US Congress to pass the Hong Kong Human Rights and Democracy Act as soon as possible. That act will help Hong Kong achieve universal suffrage by 2020,” he optimistically surmised.

It would also require the US president to annually certify that Hong Kong is “sufficiently autonomous” in order to continue receiving US trade privileges not afforded to mainland China. The withdrawal of those privileges would deal a harsh blow to a city that has long-served as a hub for conducting business and trade with the mainland, analysts say.

When asked whether his activism was prompted or directed by a foreign government, the protester replied: “I’m just expressing myself, I’m not paid by anyone. The Chinese government wants to attribute [protests] to foreigners, not to Hong Kong people.”

Beijing, for one, sees things differently. Last week, Chinese Foreign Ministry spokeswoman Hua Chunying accused unnamed US officials of stoking violent chaos in Hong Kong: “We can see that US officials are even behind such incidents. So, can the officials tell the world what role did they play and what are their aims?” she asked during a regular press briefing.

“We advise the US to withdraw their black hands,” Hua remarked, without identifying the supposed officials involved or elaborating on their alleged interference.

It’s not the first time Beijing has claimed outside meddling in major demonstrations.

China’s leadership was reviled by the sight of a 33-foot “Goddess of Democracy” sculpture modeled on America’s Statue of Liberty that was erected using papier-mâché during the student-led demonstrations in Beijing’s Tiananmen Square 30 years ago. The symbol led Beijing to suspect US intelligence involvement in those fatefully crushed protests.

Similar claims were made when protests paralyzed parts of Hong Kong for 79 days in late 2014. Then Chief Executive Leung Chun-ying publicly stated he had information that proved foreign powers were behind the most protracted episode of civil disobedience in the city’s history, though he never disclosed evidence substantiating the claim.

More recently, an article published in the Global Times on July 29 named media tycoon Jimmy Lai and pro-democracy leader Martin Lee as “protest forces in Hong Kong [who] are closely connected with foreign politicians,” citing both men’s contacts with top US government officials and Western parliaments.

The state-run publication claimed that Lai’s meeting with US Secretary of State Mike Pompeo and US Vice President Mike Pence in July aimed to fuel an “international war of public opinion against the extradition bill,” the now-shelved proposal that triggered the current spate of protests over fears dissenters could be unjustly extradited and tried in the mainland.

Hong Kong activists and politicians, including leaders of 2014’s Occupy Central movement such Lee, law professor Benny Tai and activist-turned-politician Joshua Wong, have made trips to Washington in recent years to speak at conferences, receive awards and meet with US officials and foreign policy hawks who they have publicly lobbied for support.

The US Congress-funded National Endowment for Democracy (NED), an organization whose global democracy promotion agenda is seen by some as tantamount to foreign meddling, has also over the last two decades given millions of dollars in grants to various civil society organizations in Hong Kong affiliated with pro-democracy figures who have solicited US assistance for their cause.

But a clear chain of evidence linking foreign officials and outside funding to Hong Kong’s escalating and ostensibly leaderless protests has yet to emerge.

“If there is direct evidence, it would be surprising that Beijing and the Hong Kong authorities have not been more specific,” Ja Ian Chong, an associate professor at the National University of Singapore (NUS), told Asia Times, adding that he didn’t believe there is any evidence to support claims of foreign meddling.

It is clear, though, that many of those demonstrating in Hong Kong closely identify with liberal values, are hostile toward communism, and would welcome legislative support from Western governments that exceeds the rhetorical backing voiced by Nancy Pelosi, the Democratic speaker of the US House of Representatives, and others.

“Locals have been seeking the support of other countries and Taiwan because they fear the overbearing force of China. They have appealed to politicians and activists from Europe, the US, and elsewhere,” said Stephan Ortmann, an assistant professor at the City University of Hong Kong who described protests as “largely leaderless and driven via social media.”

“The US response has not been particularly helpful in my opinion. [US President Donald] Trump’s ambiguous statements do not provide any meaningful support for the protests despite the hope of some protesters, who like that Trump is engaging China with a trade war,” he added.

Opposition politicians such as Andy Chan, who founded a small pro-independence party that was banned by authorities last year, are among those who have signaled support for Washington’s trade war, with some in the pro-democracy camp apparently intrigued that the Trump administration appears more willing to provoke China than its predecessors.

“Young people have spent their savings on gear and supplies, and many are left with no money for their own meals and public transportation fare,” pro-democracy lawmaker Raymond Chan told Asia Times in reference to protesters’ use of umbrellas, hiking sticks, saran wrap, construction helmets and skillet covers as protection.

“The pro-government minority accuses young people of receiving foreign support while the pro-Beijing camps act according to Beijing’s directives. They will never understand why these young people sacrifice their own money and their own future out of their own love for Hong Kong,” Chan said.

“Hongkongers can use all forms of international support they can get,” he added, noting that some protest supporters seek to “use the trade war and other opportunities to raise awareness to our cause.”

Even as Beijing alludes to potentially credible instances of collusion between Hong Kong individuals and foreign officials, many analysts and observers argue that the depth and breadth of popular support for the mass protests stems from a genuine concern for the future status of civil liberties and freedoms enjoyed within the Chinese-ruled territory.

Indeed, the extradition bill mulled by Chief Executive Carrie Lam’s administration became a flashpoint as it appeared to validate perceptions of the erosion of Hong Kong’s autonomy and independent legal system, a red line for many of the city’s residents.

To others, however, Washington makes for an unlikely ally in the activists’ anti-extradition struggle, given that the US itself utilizes extradition law and asserts broad extraterritorial jurisdiction to bring high-profile dissenters to heel in precisely the way Hongkongers fear mainland China would if the now-shelved extradition bill ever becomes law.

That includes Washington’s attempts to formally extradite fugitive former US spy contractor Edward Snowden when he took refuge in Hong Kong in May 2013 after leaking classified documents related to vast US surveillance programs that he sought to expose as abusive and a violation of citizens’ privacy rights.

Snowden, who has lived in political asylum in Russia since 2013, has said in interviews he initially chose to seek asylum in Hong Kong because the city has “a spirited commitment to free speech and the right of political dissent.” He also expressed “faith in Hong Kong’s rule of law,” which notably does not define espionage as a crime.