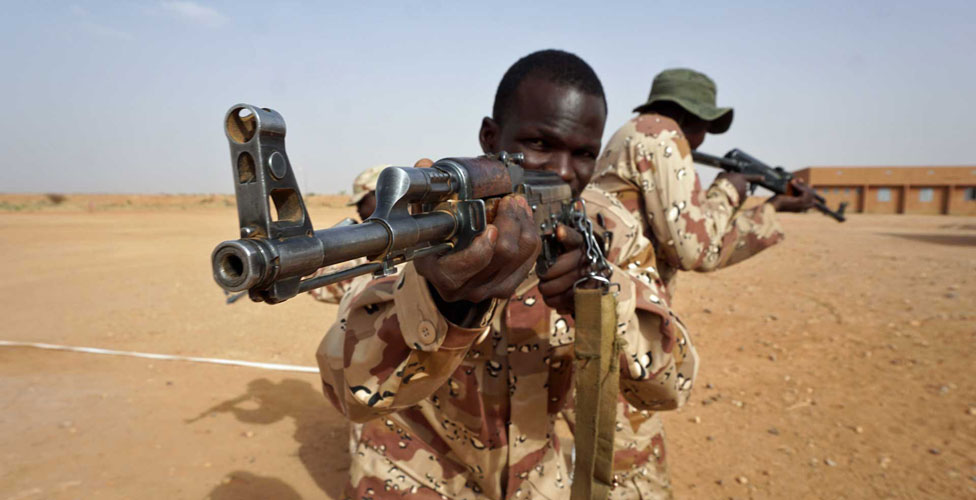 Keeping Weapons Away from Terrorists in Africa

Almost 5,000 people died at the hands of terrorists across sub-Saharan Africa in a one-year period, according to the latest Global Terrorism Index. The report by the Institute for Economics and Peace shows 1,371 incidents of terror in the region in 2017, a 5 percent increase, despite improvements made by 20 countries to better protect their citizens.

“These craven attacks are a stark reminder of why the United States remains resolved in our fight to defeat terrorism,” a U.S. Department of State spokesman said following the January 16 attack on the DusitD2 Hotel in Nairobi, Kenya.

As part of that fight, the U.S. works with countries in sub-Saharan Africa to safely store, remove and destroy potentially dangerous materials that otherwise might be weaponized by nonstate actors.

In fact, the United States invests in preparedness measures against biological threats around the world as part of its National Biodefense Strategy.

A 2015 report on the security of medical laboratories in Kenya includes some worrying statistics. At the time of the study, fewer than half of all labs had an inventory list. And two labs reported missing pathogens. Insecure pathogens threaten populations near and far from their site of origin.

In 2016, Kenya’s Anti-Terror Police Unit arrested a medical intern with ties to ISIS. The suspect allegedly was planning an anthrax attack.

In response to these problems in labs and this type of threat from a dangerous insider, the U.S. Defense Threat Reduction Agency paid for the construction of a secure storage facility at the Kenya Medical Research Institute. The $7 million project includes biomedical waste incinerators and renovated labs. The funding also includes money for comprehensive training for hospital and research personnel in biosafety and biosecurity.

Removing a nuclear threat from Nigeria

For nearly 15 years, laboratories at the Ahmadu Bello University in Kaduna state, Nigeria, used a kilogram of weapons-grade uranium to power its miniature neutron source reactor for scientific experiments. That made the campus a potential target for attack by Boko Haram, its offshoot ISIS–West Africa, or other nonstate actors in the region who might use the uranium to build dirty bombs or sell it to a third party on the black market.

In October 2018, the U.S. National Nuclear Security Administration worked with an eight-country cohort to remove the uranium from Nigeria and replace it with low-enriched uranium. The newer material powers the same research but cannot be weaponized.

Furthermore, Nigerian scientists were trained in measuring and characterizing nuclear materials at Los Alamos National Laboratory in New Mexico. The training has helped to keep their materials safe, says Ram Venkataraman, a nuclear specialist who participated in the training.

The four countries that lie in the Lake Chad Basin are among the most conflict-prone in Africa. Almost by default, the country of Chad has become a thruway for illicit weapons and ammunition traded in the region among terrorists, insurgents and sometimes corrupt security forces.

Since 2013, the U.S. Department of State has partnered with the Mines Advisory Group to train Chadian security forces in securing and managing their weapons stockpiles. They learn systems to responsibly destroy excess and obsolete weapons and ammunition and properly manage serviceable weapons. The State Department also gives the Mines Advisory Group funds to build and refurbish Chadian weapons storage facilities to secure them from burglary.