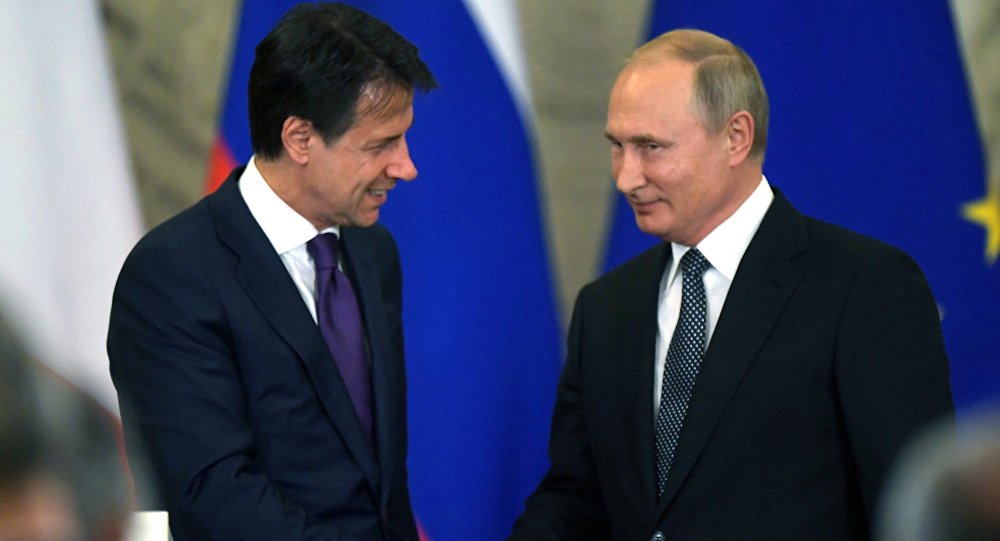 Russian President Vladimir Putin last Thursday held a very productive series of meetings in Rome that signaled Moscow’s immediate desires and concerns. The symbolism of the visit crossed many different geopolitical and geoeconomic angles that illustrate the relationship between Russia and Italy and, more importantly, the centrality of Italy in Moscow’s strategy in the greater Mediterranean and the Levant.

First off is the Moscow-Rome relationship in terms of the countries’ respective churches. The meeting between Putin and Pope Francis — the third time they have met — focused on Syria, Ukraine and Venezuela, which Putin said was “very substantive and interesting.” Putin and the Pope “expressed their satisfaction” at how ties are developing. It is notable that Pope Francis met Russian Orthodox Patriarch Kirill three years ago in Cuba, which was the first time the leaders of the Roman Church and the Moscow Patriarchate had met since the Great Schism of 1054. With Putin later saying that Russia is a protector of Roman Christians in the Middle East, the message is clear about how the idea of the protection of minorities brings the two together. This arena is one to watch in the immediate future because of the potential for future Italian defense operations where there may be an intersection of interests.

Second is how Putin wants Italy to lead an effort to remove EU sanctions against Russia that were put in place following Moscow’s taking of Crimea in 2014. Putin, with Italian Prime Minister Giuseppe Conte by his side in Rome, complimented Italy’s efforts to improve ties between Moscow and the EU, but fully understood that its room for maneuver was limited by various factors. The Russian president said: “We hope that Italy will consistently and clearly speak out about its position (on improving ties) and battle for what was said in public many times, namely for the complete return to normal relations between Russia and Europe as a whole.” This is a masterful play on Conte and the Italian political parties, such as the Five Star Movement and the right-wing League, including the latter’s leader, Matteo Salvini, who supports stronger ties with Russia.

Tellingly, at the end of his one-day visit to Rome, Putin met former Italian Prime Minister Silvio Berlusconi. The two are close friends and their relationship is part of the background of the partnership between Russia and Italy, which is seen by some as crucial for the Italian economy.

Putin is aware of this fact and wants to use the Italians to get rid of the EU sanctions. In an interview with the Italian newspaper Corriere della Sera published on the eve of his visit, Putin called Berlusconi “a world-level politician.” He said: “We are bound with Berlusconi by a years-long friendship. Silvio is a world-level politician, a true leader who safeguards the interests of his country on the international arena. His sincere desire and willingness to preserve and enhance the capacities of our countries deserve respect. We cannot see each other often but, when an opportunity avails itself, he never allows himself to talk about internal policy. I don’t do this either.” This personal relationship plays well with certain circles of the EU landscape, which is fractured between Euroskeptics and those seeking to repair the organization. Putin’s interlocutors for removing sanctions will do their best with Brussels.

Third is how business and energy drives the Russian-Italian relationship. The Russian Direct Investment Fund (RDIF), Russia’s sovereign wealth fund, signed a €300 million ($336 million) deal with an Italian group to build Italian business in Russia a day before Putin made his trip to Rome. More importantly, RDIF CEO Kirill Dmitriev is leading Putin’s effort by announcing from Italy that Brussels should lift its Russian sanctions. Naturally, the larger picture of Italy’s Eni energy company throughout the Mediterranean Basin is of deep interest to Moscow, as well as the development of the EastMed pipeline and the Trans-Adriatic Pipeline, which are also tied up in domestic Italian politics and are a necessary part of weaning Europe off of Russian gas.

Finally, Putin’s comments about Libya are certainly of interest because of the centrality of Rome to the future of the broken North African country. Putin said he was worried that extremists were flowing into Libya from Syria’s Idlib province and warned that the situation was deteriorating. The Russian president’s “Idlib to Libya” remark is indicative of the phenomenon of several hundred extremists, who earned their chops on the Syrian battlefield, fighting on behalf of the Government of National Accord in Tripoli, as well as the re-emergence of Daesh in Libya. These fighters have represented groups such as the Derna Mujahidin Shoura, the former Ansar Al-Sharia, and the Libyan Islamic Fighting Group (LIFG). Syrian fighters were reportedly brought in by Libyan Wings — an airline owned by the “reformed” LIFG emir Abdelhakim Belhaj — via airfields in southeastern Turkey. In the past, Daesh used Milan as a transit point to Libya.

Putin’s use of this issue is part of a wider calculation of Russia’s approach to what happens next in Libya — all “because of NATO airstrikes in 2011.” It is also a message to many stakeholders, including Rome, of Moscow’s multiple interests and is part of the reason why UN sessions concerning Libya are closed to the public.

Overall, Italy is important to Russia. As the Kremlin wants to play in the Mediterranean assets game, Putin is using Italy to try to cast away EU sanctions so Moscow can enter this arena more easily. Whether Rome is in a position to help Russia on the European front remains to be seen.