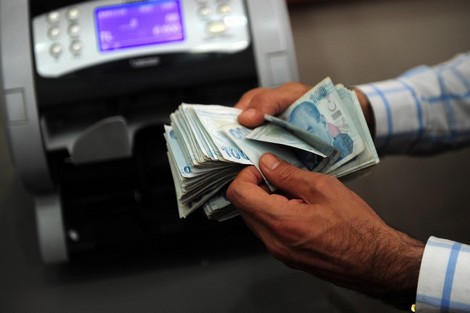 The Turkish lira suffered its worst day in months on Monday after President Recep Tayyip Erdogan sacked the country’s central bank governor over a dispute about interest rates.  The currency, which had enjoyed a rally throughout May and June, was down more than 2 per cent against the dollar at 7.45am BST following the firing of Murat Cetinkaya.  In Asia trading, the currency had fallen as much as 3 per cent before trimming losses. The currency came under fresh pressure as Turkish financial markets opened on Monday morning.  The country’s debt also faced a significant bout of selling pressure. The yield on a 10-year dollar denominated bond maturing in 2029 jumped 30 basis points to 7.28 per cent, marking the heaviest sell-off for the paper since late May. Turkey’s main stock benchmark, the Borsa Istanbul 100, fell as much as 1.5 per cent, before cutting its losses to 0.8 per cent.

The sacking of Mr Cetinkaya, who had served three years of his four-year term, was announced in a presidential decree published in the early hours of Saturday. He was replaced by his former deputy, Murat Uysal, a former executive at the state-owned Halkbank and its subsidiaries.  Mr Cetinkaya was long viewed with suspicion by investors, who saw his three year term in office as marred by the accusation that he was too slow to raise rates, especially during a currency crisis that gripped the country last summer. But the manner of his sacking — and the reasons behind it — served to deepen investor concern about the direction of economic policymaking under Mr Erdogan, who is a notorious opponent of high interest rates.  Mr Cetinkaya had fallen out with the Turkish president and his son-in-law, the finance minister Berat Albayrak, over the pace and depth of rate cuts, according to people familiar with the matter. Mr Erdogan, who last month warned that high rates were “hurting” Turkey, confirmed the row at a meeting of ruling party members of parliament on Saturday, according to Hurriyet newspaper.

“At economy meetings we told him time and again that interest rates must come down,” he is reported to have said. “He did not do the necessary thing. We were not on the same track.”

Turkish assets had enjoyed a rally in recent months, thanks partly to a global backdrop that has favoured emerging markets. They were also helped by Turkey’s high “real interest rate” — the gap between the bank’s benchmark interest rate of 24 per cent and the rate of inflation.

Investors were further buoyed by Donald Trump’s conciliatory tone over Turkey’s purchase of a controversial Russian S-400 air defence system when he met with Mr Erdogan during a meeting at the G20 summit in Japan. Officials at the Pentagon and the US State Department have warned that Turkey’s acquisition of the S-400, which is expected to begin arriving in Ankara this week, will lead to painful sanctions.

The lira gained 6 per cent against the dollar from the start of May until the end of last week, according to Bloomberg data, making it the best performing major emerging market currency.

But investors are concerned that the sacking of Mr Cetinkaya means that Mr Erdogan will seek to “short circuit” the sharp slowdown in growth that has allowed Turkey’s overheated economy to cool in the wake of the August currency crisis. Inflation, which had soared to more than 25 per cent following the crisis, fell to 15.7 per cent last month. The country’s wide current account deficit has drastically shrunk.

Phoenix Kalen, an analyst at Société Générale, said that the favourable external environment provided a “cushion” for Turkish assets, but warned: “This buffer may quickly evaporate if there are monetary policy mis-steps.” Goldman Sachs analysts Murat Unur and Clemens Grafe said that the room for aggressive rate cuts was limited, especially in light of a trend of dollarisation among Turkish citizens and businesses.  They predicted that the new central bank governor would be forced to act cautiously. “While there is a risk, in our view, of more front-loaded rate cuts, we think that these will ultimately lead to more lira volatility and possibly result in rates having to be raised once again,” they wrote in a note to clients. “Given that the new [central bank] leadership will first need to set its policies and establish its credibility, our confidence that the market has priced too many cuts towards year-end is higher given [Saturday’s] events.”